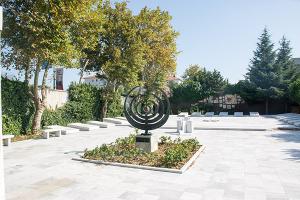 One of the most popular cemeteries of our community, the Ulus Ashkenazi Cemetery has been open for burials since the 1900s like the Sephardi Cemetery.

From the time it was initially opened to burials; with an orderly plot allocation plan and good perimeter walls this cemetery has had an orderly burial system up to the present.

All burials are under control and have full records. Our visitors are guided to the the exact location of the grave they want to visit, based on the the records on our files.

Although it was allocated for the sole use of the Ashkenazi community due to need the Sephardi community burials are also done here in accordance to a mutual agreement of both sides.

Maintenance work is done, weeds & shrubs are cleaned and paths renewed regularly, in the same way as all other cemeteries.

In addition, there are the tombs and monuments in memory of those who lost their lives in the September 1986 and November 2003 terror attacks to our synagogues.

The relations pursued with the official authorities, burial and caretaking of the cemetery is undertaken by the Neve Shalom Foundation.