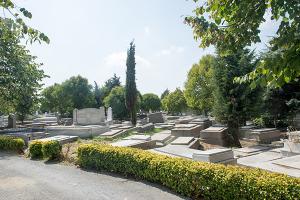 Haskoy is one of the oldest districts where Jews used to live and one of the older still-used Jewish cemeteries is located there. During the many centuries the Haskoy Cemetery was used, as a result of earthquakes as well as the destructive intrusions of private people and official authorities, the plot has been significantly reduced. Especially in 1972 when highways and the Golden Horn Bridge were being built, hundreds of tombstones had to be moved. As seen below, some were transferred in an orderly way whereas some had to be Halachically buried in collective plots.

During the above period in order to prevent people from damaging or stealing tombstones, the stones had to be stacked within the cemetery on top of each other.

After the highway and new roads were built, the local population started to trespass and use the cemetery as a short-cut passage. The walls were not strong & high enough to stop this trespassing and the people around did not cooperate, on the contrary used violence against the community leaders who wanted them to stop the trespassing.

The tombstones have been misused by the local population and have been in numerous occasions vandalized; burnt, used as a garbage dump, and have been disturbed by people seeking treasures in the ground.

For many years the leaders of the community seeked to explain the problems to the local authorities and have in time been able to cooperate together to improve protection of the cemetery by reinforcing the perimeter walls, also adding extra wire mesh on top of some parts of the walls,

Cooperating with the local police they have been able to organize constant police patrol further enabling the maintaing of a watchman day and night. Presently the local population is not able to pass through the cemetery and use it as a shortcut; thanks to the presence of watchdogs cannot dig the earth to seek treasures and intruding into the cemetery for different reasons has decreased. Despite all these measures our watchman suffers constant verbal abuse from locals and our dogs are continuously attacked with the intent to mutilate or kill.

We continue with our intense cooperation with the local authorities in order to be able to stop the above abuse and attacks.

In 2005 we rebuilt the midrash in the same location of the old one, With this change community members started preferring the Haskoy Cemetery more than in the past. However because of the decrease of empty plots We have started to prepare new burial areas under the control and supervision of the Chief Rabbi of Israel and his representative here. For this reason in plots where there are no tombstones, Halachically correct support walls which are higher than necessary have been built without digging into the ground the interiors of the plots have been filled with earth transported from outside and have been prepared for burials.

Burials are being done in the plot prepared as explained above and the rest of the area is being prepared similarly for future burials.

The above work has been done carefully, respecting the borders of the graves and no damage was given to the graves.

All the work is being done under the control of our Beth-Din. In addition, the graves of the deceased with no relatives to be found and which have been damaged by natural causes or as a result of human abuse are being repaired with concrete and marble by the Neve Shalom Foundation.

The relations pursued with the official authorities, burial and caretaking of the cemetery is undertaken by the Neve Shalom Foundation.