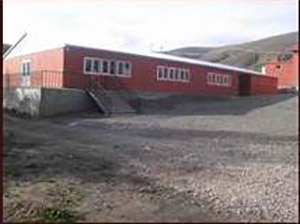 Turkish Jewish Community is opening Selahattin Ülkümen Primary School In the village of Kıratlı in Van.

Turkish people have been deeply saddened by the earthquake that happened on Oct 23, 2011 in the city of Van and corporate and individual assistance had been delivered to to the region in the shortest period.

As the Turkish Jewish Community, having been involved in the humanitarian aid from the first ment, we have decided to build amoschool for the children in Van who have been deeply affected by the earthquake and whose education was interrupted by this disaster.

Having heard our initiatives on this matter, American Jewish Joint Distribution Committee and American Jewish Committee, longtime partners with the Turkish Jewish community, have contributed to the construction of this school.

Due to the severe weather conditions, the construction of the school in the village of Kıratlı in the city of Van has been recently completed and is ready for the opening.

Donated to the children of Kıratlı village, 6 classroomed school is dedicated to Selahattin Ülkümen, Consul General, who had saved the lives of many Jewish people in Rhodes during World War 2 and even under the severe conditions had tried unconditionally to protect the human dignity.

The opening ceremony of Selahattin Ülkümen Primary School will be held with the participation of mayor of Van, Münir Karaloğlu, on Tuesday, June 5th 2012 at 11 am