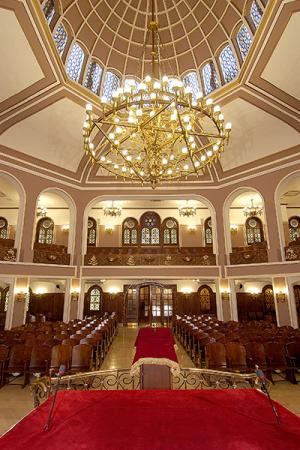 In the 1930s, with the increase in Jewish population living in the Galata and Beyoğlu, the community needed a new place of worship. The new project of architects graduated from Istanbul Technical University,   Elio Ventura and Bernard Motola was accepted and the Neve Shalom synagogue was opened on March 25, 1951 as Istanbul's largest synagogue.

Neve Shalom means "Oasis of Peace" and at the Synagogue open for Shabbat prayers most importantly hosts Jewish ceremonies and commemoration of community members; such as Bar Mitzvahs, weddings, Brit-Mila (circumcision) and funerals and is the largest place of worship of the Jewish Community in Istanbul.

When the primary school located adjacent to the synagogue was moved to its new location in Ulus in1994 the vacant building was transformed into the Neve Shalom Cultural Center in 1998.

On September 6, 1986 during the Saturday morning prayer Palestinian terrorists attacked with hand grenades and machine guns and killed 25 people who were praying in the synagogue at that time.

In November 15, 2003  Saturday morning, terrorists linked to al-Qaida with truck loaded with explosives  blew themselves on the Büyük Hendek Avenue at the same time another one in front of the Sisli Bet Israel Synagoguewhere in total 24 people lost their lives in these attacks. The victims of the terrorist attacks among whom six were Jewish are all commemorated with the special plaque in the Neve Shalom Synagogue entrance hall